November 05, 2014
** Heads up to all my readers, this post is personal to me and talks about some stuff I've been dealing with. I don't think it's graphic but some could classify it as TMI (too much information) so if you don't want to read the back story feel free to skip down below the list pics and read from there. **

Lately I've had some issues with allergies and a crazy rash I had on my hands. I saw a dermatologist who thought it might have been a fungus like ringworm but when we tested it, it came back negative. Apparently it's possible the swab just was negative since it's not as sensitive as taking a full on biopsy which would require taking some of my skin to check under the microscope. By the time we finally got the test results we had already moved forward with doing some serious work around our house and my hands were almost healed.

First of all ringworm is not a worm, as I mentioned it's a fungus. It's relatively common (if you've ever heard of athletes foot or jock itch you've heard of ringworm) and given there is fungus in everyone's environment it's hard to pinpoint why some people get infected and others never do. It can be spread between humans or between humans and pets like cats or dogs. Since we have three cats and no one else in the family was showing any signs of an infection we decided the cats were the most likely culprits.

I just went to VA for a work conference so while I was out of town Joe and his friend got rid of our old couches (he'd had them since before we were married) since we've had them with the cats and with dogs. Joe also had our carpets cleaned where we allow the cats to be (we don't allow them in the bedrooms because I like to have some space in our house that is clean/cat free). My dermatologist is concerned that I could be allergic to cats which is exacerbating my issues so all the cleaning we could do was in order.

As part of all of this craziness I have an appointment with another doctor to confirm if I'm allergic to cats amongst other things (my brother is allergic to almost everything they test people for). We also started some additional cleaning around the house so I could safely say that we'd done all we could to eliminate other allergens that could be causing my body stress. I introduce you to our year end cleaning lists: 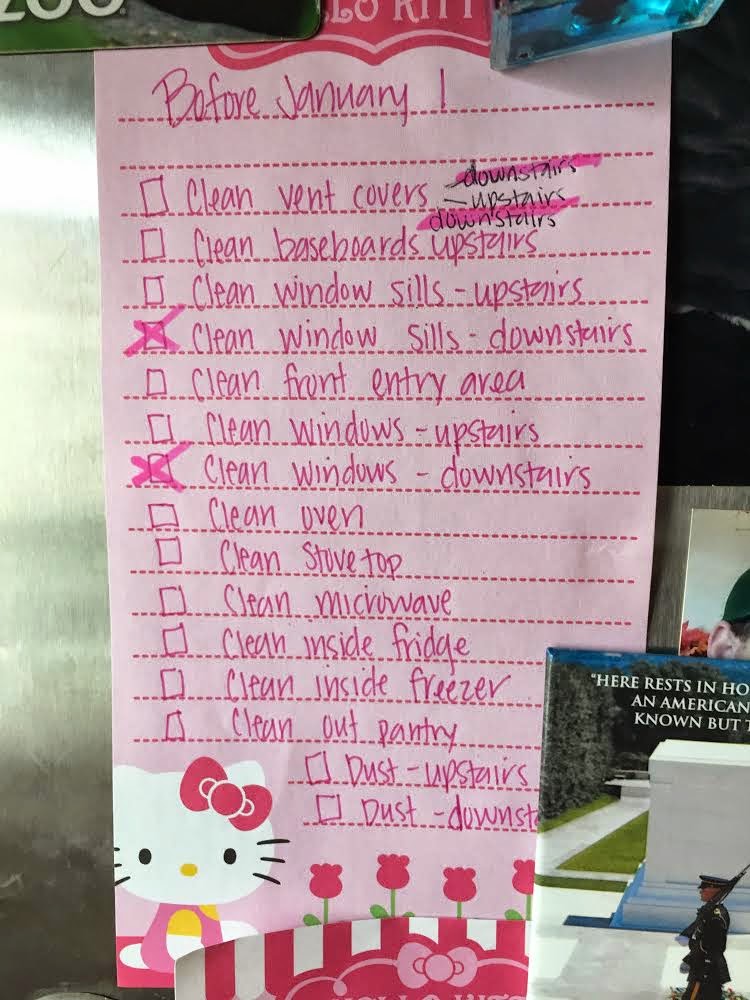 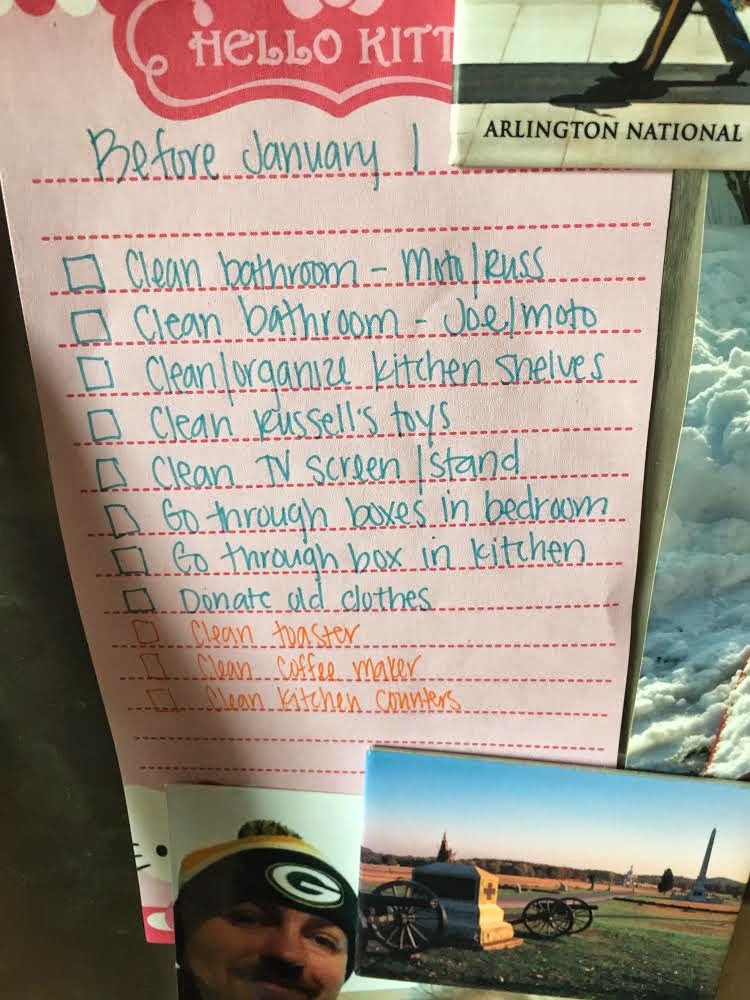 These lists are on our fridge and include all the things I want to do before the new year. For me, having a dirty house is distracting. It makes me feel crappy about our house and where we live and makes me not want to have anyone over which is sad. I also make myself feel bad when the house is dirty because I question how I can let us live in this level of filth. Now, I promise I'm not living in a state of squalor and I know there are people who are far worse off than me but I grew up in a clean house so when there are layers of dust (seriously you can see it from across the room) and piles of clutter (stuff in boxes since we moved in over two and a half years ago) it drives me nuts.

I decided there were three main reasons to give the house a deep cleaning.
I always loved the idea of spring cleaning but honestly I think a year end cleaning is a much better idea. Where we live it gets cold so we tend to leave the house closed up most of the winter. This means that all the dust and clutter just sits around getting dustier through the winter. I know this is bad for people with allergies so we're cleaning as much as possible now while we can still have the windows open to get some fresh air in. In addition to wanting a clean space I also want to clean out all the old crap and free up some positive energy so I can really focus on my Yoga Teacher Training and setting our goals for the new year.

Even though we've only just started cleaning I can say I already feel so much better about things. We've uncovered a stack of cookbooks I've been wondering where they went to, we tossed a bunch of old stuff that wasn't serving us, and have done a bunch of cleaning in the main space we spend our time in which makes me feel so much better about things.

In the coming weeks I am going to post about setting goals and some fun things that will be on the blog in the new year. For now I am challenging you to start your own year end cleaning spree. You've got two months to get rid of all your old things that no longer serve you so you can open up new space to receive all the good things we're going to create in the new year.

Here are three quick tips to get you started in case you're feeling overwhelmed:
Now get making your year end cleaning list and be honest with yourself about what needs to be done so you can move into 2015 feeling positive and ready to move forward with new goals. If you create a list and share it post a link to your blog so I can check out what you're doing. Let's clean things up and finish 2014 with a bang!