August 08, 2014
Hey everyone! If you follow us on social media (Facebook, Instagram, or Twitter) you've probably already seen some of this but I wanted to make sure it all ended up on the blog too.

Oquirrh Shadows Park is located just west of Bangerter Highway off of 10600 South. If you're heading towards Daybreak and have seen the fire station there you're in the right place. I know the fire station used to (or may still be) a Bountiful Baskets pick up site so it should be familiar to some folks.

Over the Pioneer Day weekend this awesome splash pad opened up at what was already one of our favorite parks for Russell to play at. We love that it's right by the fire station so it's well trafficked by both law enforcement and other families with kids. We like that the play equipment isn't all just for big kids so there are things Russell can do. There's also a huge field where people play soccer or run around a track area that circles the perimeter of the park. Russell sometimes loves just running across the field while we follow behind. There are also pavilion spaces with picnic tables which make for nice resting spots when Russell needs a break. 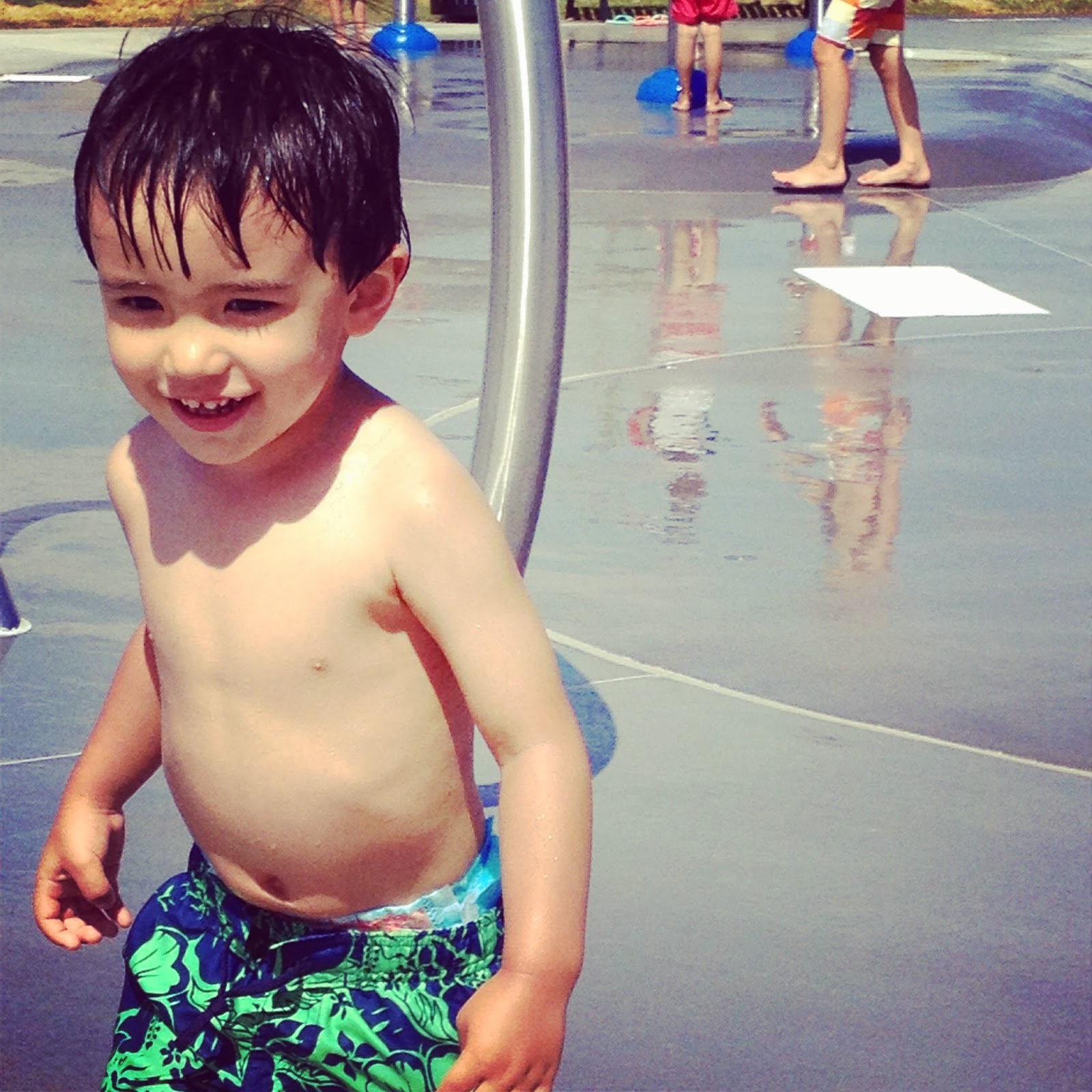 Part of me hesitates to share information because then I know it will only get busier there but it's just too good not to invite everyone out to have a good time. The splash pad is available 10:00 a.m. - dusk every day, according to the South Jordan Parks and Rec site. They anticipate it being available from Memorial Day through Labor Day which seems typical for most pools and splash pads. 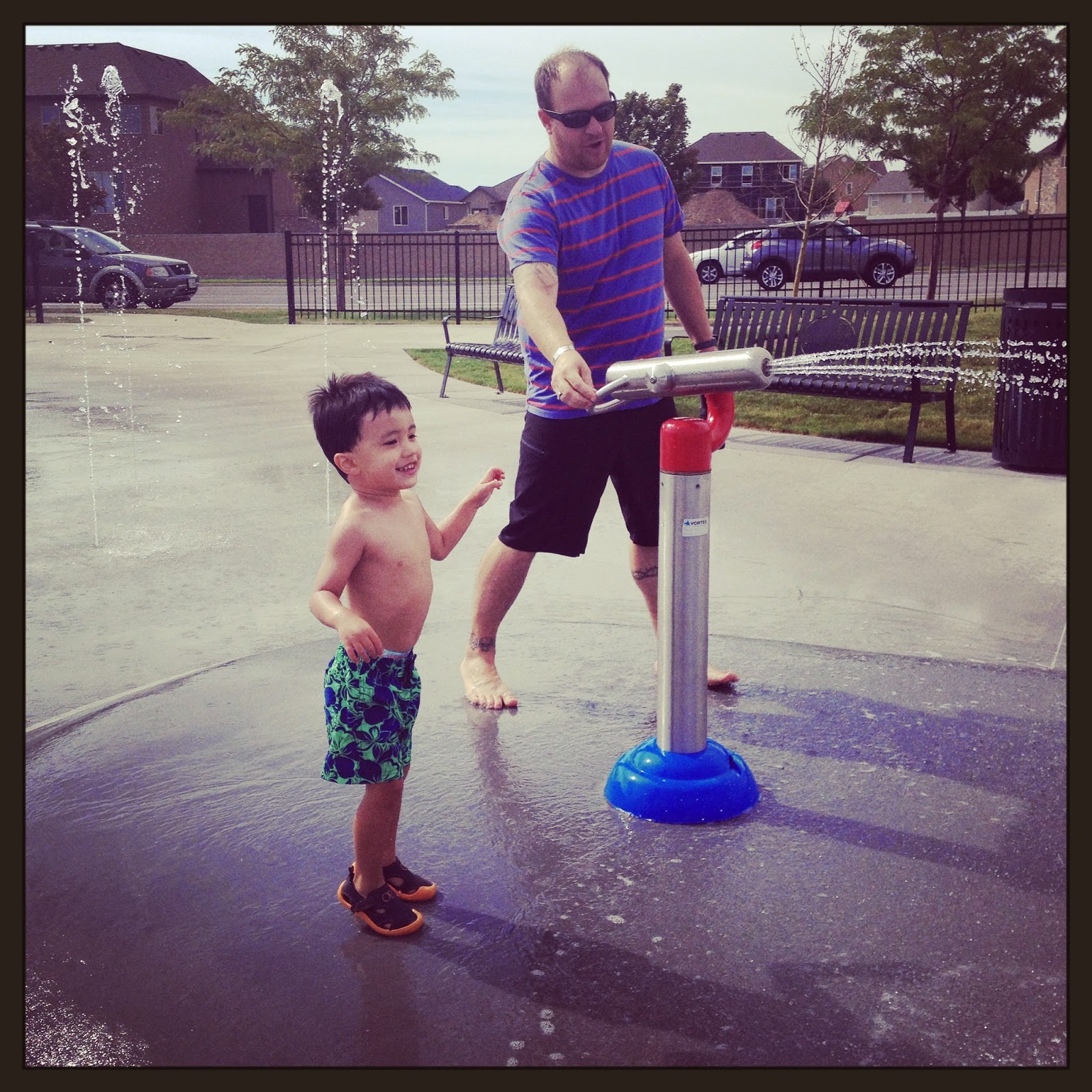 We have found the best time to go with the little ones is first thing when it opens or on Sunday. At that time there's usually more families with small kids which makes it fun for them and there's less chance that they'll get knocked over by the big kids who sometimes don't seem to pay attention to anyone around them. There are so many things the kids can interact with and truly I've seen all ages enjoying the space. Some cool parents are even out there with their kids getting soaked and having a good time. 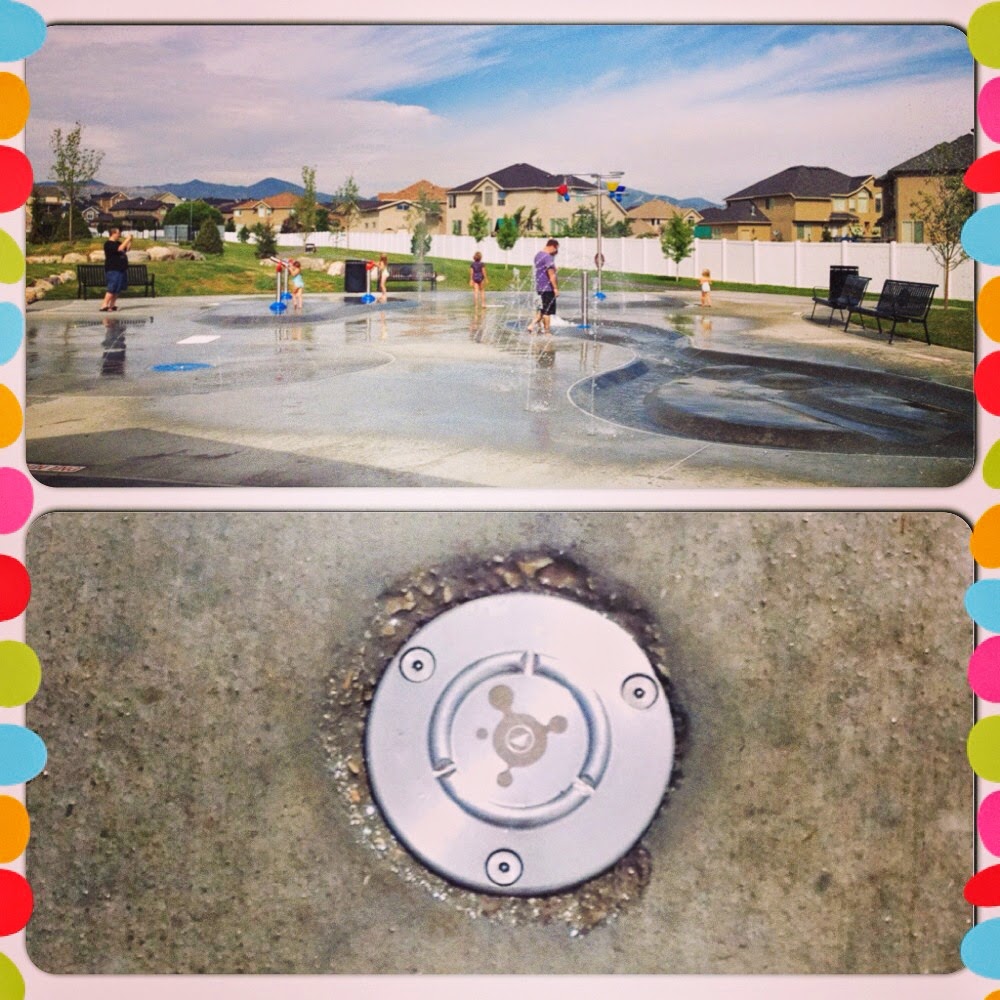 One thing worth noting, that some people are starting to catch on to, are these little round buttons that are in the ground. (See the picture above.) There are three of them (one on the far west side by the water guns, one in the middle of the blue drain on the south side by the arches, and the other is on the north side by the river) and they are what turn on the water features. It's super smart so the water doesn't run all day if no one is there and great for the kids so they can start the features as they're playing with them. Sometimes you do have to wait a second before they'll turn on but it always seems to work out.

Another thing worth noting if you go with bigger kids, sometimes they want to block the water in the river thing on the north part of the splash pad but if they do that it tends to shut everything down. I'm pretty sure if enough water doesn't cycle through it auto shuts off so it doesn't burn out. At least that is what's happened in the past.

Anyway, if you're in the south end of the valley get your kids over to this new feature in South Jordan and have some fun! We love it so much and hope to see more parks like this in other neighborhoods. It's so great to see people getting outside and having fun together!

Do you have any favorite splash pads or public parks you like to go to? Any locals with kids around 2-3 that have any parks that are great for that age? If you ever want to meet up at our favorite park let us know and we can get something scheduled!
2014 Family