February 22, 2014
Lately Joe and I have been branching out into different types of food. We've tried gluten free options as well as vegan or vegetarian dishes. Why? Really because we enjoy expanding our options and trying new things.

A little while back we decided to try a recipe out of my new vegan cookbook Joe got me for Christmas. It's called Veganomicon: The Ultimate Vegan Cookbook

and the recipe we tried was the Tempeh Shepherdess Pie. Now to be honest, we have never tried tempeh and had no idea what we were getting into but we are open minded and for Joe as long as it's not beans he'll usually humor me and give it a whirl if I make the effort to put something together. (FYI if you google Tempeh you'll probably be afraid of what you're about to try but throw caution to the wind and just make it with the tempeh. You'll be fine.)

Finding the tempeh actually did require us to go to a Whole Foods to find it but that's ok. We rarely shop there so it's sometimes fun to go see what kind of foods they have going on. If you have a Trader Joe's or Sprouts nearby, a store like that would probably have tempeh. You might have to look but give it a try. This recipe can look intimidating but it was really easy and the results were so worth it. It's a great dish if you're vegan or not. 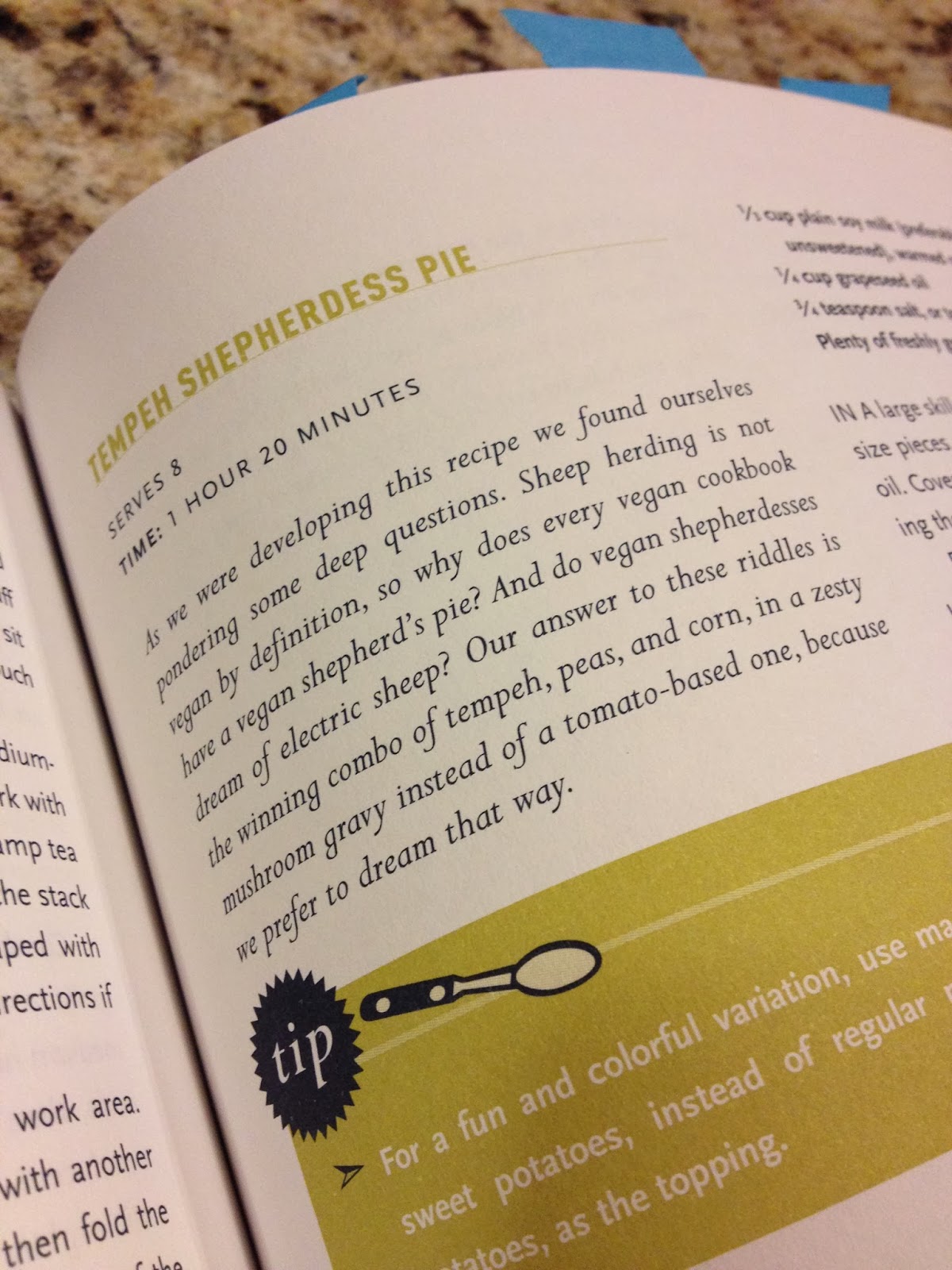 by Veganomicon: The Ultimate Vegan Cookbook 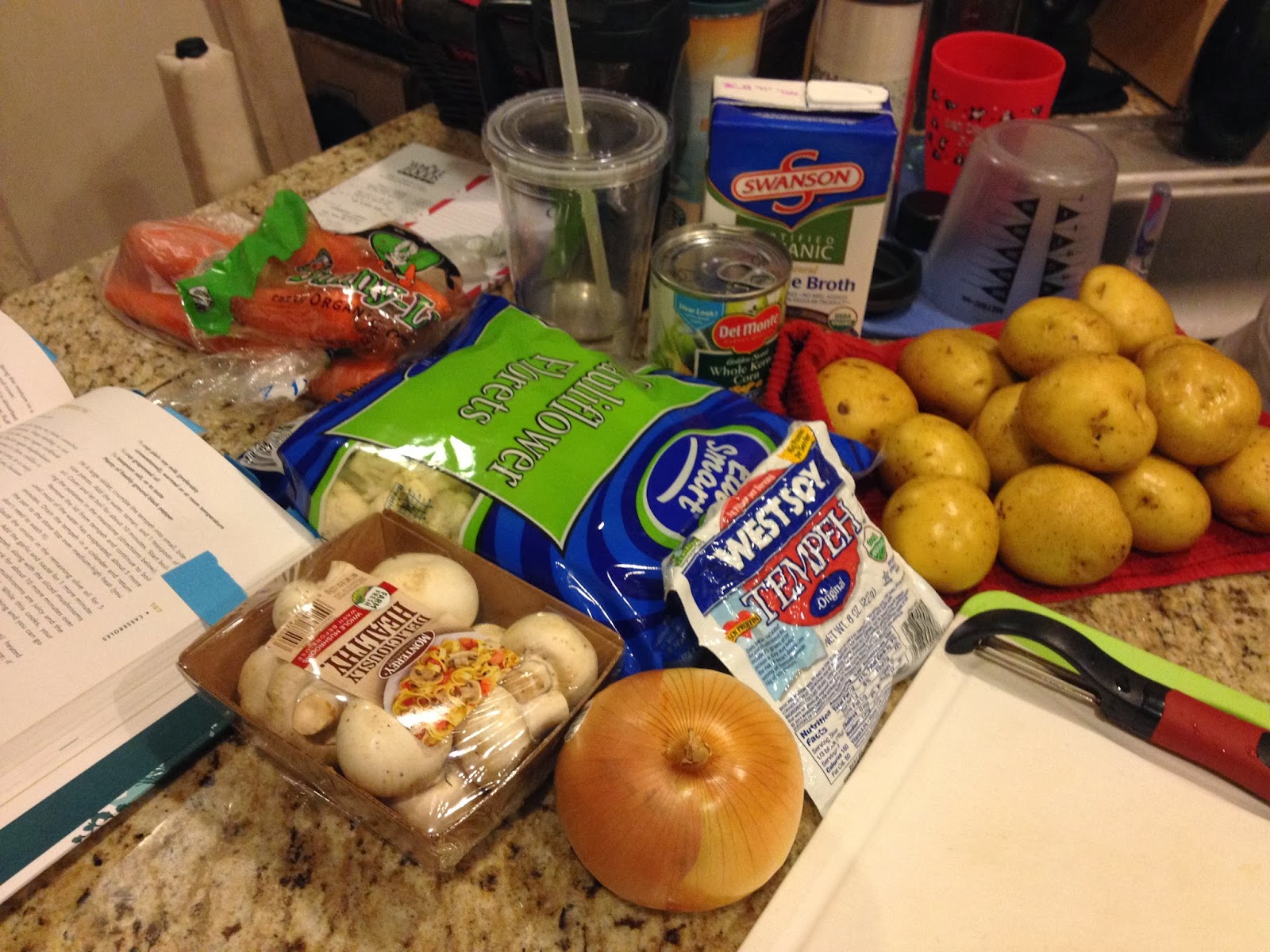 In a large skillet, crumble the tempeh into small, bite-sized pieces. Add the water, tamari, and 1 teaspoon of oil. Cover and let boil for about 10 minutes. Start boiling the potatoes in the meantime (directions below).

Remove the lid from tempeh and continue to boil until most of the water has evaporated, about 5 more minutes. Drain the tempeh in a colander and return the pan to the stove top over medium-high heat (you don't need to wash it).

Saute the onions in the remaining olive oil for 5 minutes. Add the garlic and saute for 1 more minute. Stir in the tempeh, along with the sliced mushrooms and the spices. Cook for about 10 more minutes over medium heat until the mushrooms are juicy and the tempeh is slightly browned. While this cooks, your potatoes should be ready for mashing and you can go ahead and preheat the oven to 375.

Add the corn and peas, and cook until heated through. You may need to add a little extra oil here; if you have a spray bottle of it, you should use it.

Mix together the vegetable broth and the flour until pretty much dissolved (a few lumps is ok). Add to the tempeh, along with the parsley, and stir. Let thicken for about 3 minutes, stirring occasionally. It will thicken more as it bakes.

Place the potatoes in a soup pot and cover with water (the water should be about 1 inch above the potatoes). Cover and bring to a boil. Let boil for 20 minutes, or until they easily cut with a fork. Drain and return to the pot. Use a potato masher to mash them up a bit, then add the soy milk, oil, salt, and pepper. Mash very well, until creamy. Cover to keep warm until ready to use.

Place the tempeh filling in a 9 x 13-inch casserole dish. Spoon the potatoes over the filling (although, truth be told, we use our hands for this because it's just easier).

Place in the preheated oven and bake for 20 minutes; the potatoes should be slightly browned on top. If they are not, place under a broiler for 2 to 3 minutes. Remove from the oven, garnish with chopped parsley, use a spatula to cut into eight squares, and serve.

Modifications
* Joe does not do peas so we subbed in diced carrots instead.
* I totally didn't realize I needed two packages of tempeh so we made this with only one and it was fine. We did half the amount of water and soy sauce we cooked it in though since we were only preparing the one package.
* This recipe made a TON of food. Maybe I put in more veggies or maybe my pan was small but we could have easily put this into two pans and froze one for later or given one away. It was a boat ton of food.
* I feel this recipe could be jazzed up with your own favorite veggies or whatever is in season if you want to go non-traditional. You could definitely add different seasonings too to give it a different twist. I could see making this in two dishes flavored with different spices and different veggies and freezing one for later. MMMM!!!
* Living the low carb lifestye? I bet you could make this with a cauliflower "mashed potato" topping and it would be just as good. No idea what I'm talking about? Go to Allrecipes and search mashed cauliflower.

This cookbook really is the ULTIMATE vegan cookbook. There is a whole section up front that talks about the different vegan products you'll encounter in the book. They talk about how to prepare different vegetables properly and what tools you would want to have in your kitchen. Seriously it's a GREAT resource if you're a vegan cook or a regular cook. I highly recommend picking this one up if you're at all interested in branching out into new things. Plus many of the recipes don't have anything scary in them and if you really were so inclined you could easily sub in meat. *GASP* I know vegans everywhere may be hating me but I want to be real. If this is not your lifestyle you can still enjoy the yummy recipes. Plus who knows this may be a gateway into having healthier meals every now and again. I for one, am all for the idea of meatless Monday or going meat free once a week or more. Meat takes a ton of resources to produce so going meat free actually is good for the environment and your health. But, I'm not an expert so if you want more info, it's out there...

Do you branch into different types of cooking? Do you enjoy trying new things or do you prefer to stick with the tried and true recipes you know your family will eat? If you have a favorite go-to cookbook please share it in the comments. I'm always looking for new cookbooks to add to my collection.
2014 Adventures in Food Cooking Moto Saturday's Supper Vegan