October 06, 2012
Ah, another crock pot delight. This soup was tasty. I have been really enjoying Thai food lately and this soup was a good homemade alternative to buying soup from a restaurant. Plus we double the recipe and then the soup lasts for a couple of days. Enjoy! 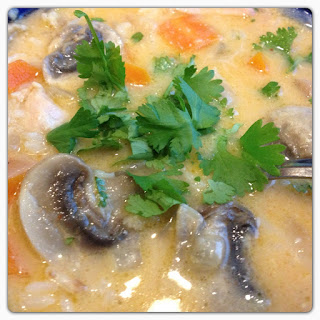 1. In a microwave-safe bowl, combine onions, garlic, ginger and oil; cook for about 4 minutes until onions are softened. Transfer to slow-cooker.
2. Stir in broth, 1/2 the can of coconut milk, lemon grass, carrot, 1/2 Tbsp. fish sauce, cilantro stems and chicken.
3. Cover and cook on LOW for 4-6 hours, until chicken is tender.
4. Remove the chicken from the slow-cooker; using two forks, shred the chicken into bite-size pieces. Return to slow cooker.
5. Let soup settle; skim off fat from the surface.
6. Discard the lemon grass and cilantro stems.
7. Stir in the mushrooms, warmed remaining coconut milk, 1 Tbsp. fish sauce, lime juice, sugar and curry paste.
8. Season with salt and pepper and garnish with cilantro; serve.

* We sauteed the onions, garlic and ginger in the oil on the stove top instead of in the microwave.
* Make sure you save some of the coconut milk to stir in at the end. It will help preserve the yummy coconut flavor.
* We just sliced up the carrots instead of shredding them. I think they would have cooked into nothing if we shredded them.
* We trimmed the chicken of fat and cut it into bite sized pieces to begin with instead of having to shred it later. I do like the flavor of using chicken thighs but they are kind of a pain compared to chicken breasts so whatever you have would probably work.
* There wasn't much fat to skim in our soup. Maybe because we really trimmed up the chicken before cooking it.
* Definitely keep the cilantro tops to garnish. It adds a fresh taste to the finished dish.
* Don't be afraid of the fish sauce. Yes it smells funk but it adds a unique taste to the finished dish you won't have without it.
* We added a little extra curry paste because we like the flavor. If you made the Thai Beef Curry recipe I featured a while ago you'd have some already on hand.
* Some extras we thought could be tasty would be bamboo shoots, Chinese cabbage, potato, bell peppers, and extra carrots.
* This was good served with rice but if you made it with potatoes in the soup you could skip that. Also if you like heat you could add some red chili flake or other Asian hot sauce to the finished soup.

Do you have a favorite type of food you've been reaching for lately? Do you enjoy trying to make your restaurant favorites at home or do you prefer to just go out?
2012 Cooking Joe Cooking Moto Saturday's Supper