December 01, 2011
Today we took Russell to the gastroenterologist. He's still doing well and we're working with his speech therapist Tracy on getting him down to thinner liquids. So far he's tolerating the feeding changes well. He weighed 15 pounds 7 ounces and was 26.5 inches long today. WOO. He's my big little man. HE HE HE.

After we came home we were sitting with Russell and he decided Daddy was really funny so I had to share this...

The video looks like it's shaking because he was on my lap and I was rocking him on his Boppy. I didn't want to stop because whenever he realizes he's being video taped or photographed he tends to stop what he's doing. We were very sneaky but it was worth it to capture his fun laughs. 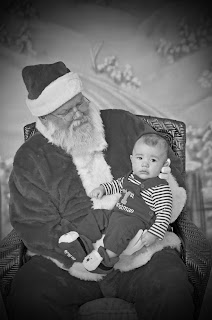 Another thing we did recently was get Russell's picture taken with Santa. I got an invite from my friend Rachel that said she had a Santa coming over and that we could get pictures taken with him. It was inexpensive, fun and she did a great job! I didn't even know she was a photographer so it was fun to see her work and get a great keepsake of Russell's first Christmas.


If you're in the Las Vegas area and looking for a great photographer at very reasonable prices you MUST contact her. Just let me know and I can get you her phone number or email address. She's even got special family Christmas sessions available on Saturday, December 10th and Sunday December 11th. You also get your pictures on a CD which is awesome because you can get them printed anywhere, share them by email or whatever you want to do with them. Some places make you buy the pictures direct from the photographer or you only get to pick a limited number of poses. I love that we got plenty of pictures and they were ours to do what we wanted with them. Hooray!
Baby Mac