September 04, 2011
WOW! What a couple of weeks. Baby Russell has had a lot of firsts and we've enjoyed some firsts along with him.

Tuesday - August 23rd - Russell participates in a Modified Barium Swallow Study to learn more about how he eats. From what the doctors learn they decide to limit his bottle feedings to only twice a day with the Occupational Therapists. They want to be careful with his feedings because they don't want him to choke on his food and get a food aversion. If that happens babies can end up refusing to eat and then end up having to have a feeding tube placed through their stomach. We definitely don't want that if it can be avoided. 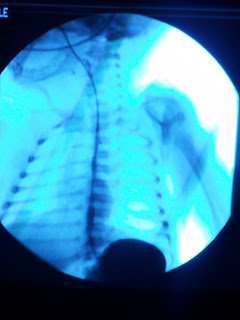 Wednesday - August 24th - Russell is transferred out of his room in NICU 3 to the NICU 2. He's still in the same area and still receives around the clock care. The nurses in the NICU 2 have 2-3 babies each so he gets to share his nurses with his neighbors. Joe and I also took the Infant CPR class. It is offered free at the hospital and we figured we might as well learn the skills just in case. Of course we hope to never have to use those skills but it's good to know. I also got to kangaroo little Russell during his feeding. Basically you put the baby against your skin down your shirt while he receives his feeding through his feeding tube and it helps him to associate feeding with his mother. I think he just got cozy and warm but it was nice.

Friday - August 25th - Russell was moved into a regular "crib". It's actually the plastic looking thing that normal babies are put into when they are born. He looked so huge in it so they worked to get him a larger crib. It's labeled as a "bassinet" but basically is a flat surface with short plastic sides. It does have more space though so he doesn't look like he's cramped into a tiny box. Russell also had his PICC line removed which is huge because that's one less tube he's attached to. Horray! The nurse told us he also lost his umbilical cord stub too. 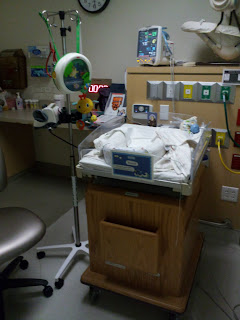 Sunday - August 28th - It was the first time Russell got to wear a onesie. Since he got the PICC line removed he can wear his own clothes and be held anytime. I also got to bottle feed Russell and he ate 26cc's of breast milk. He did a really good job eating which is great for his progress. We're also learning exercises we can do with Russell to help his muscle tone and positioning. 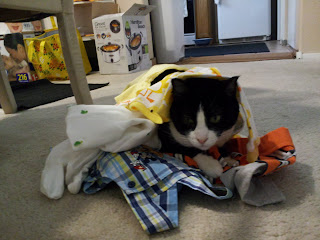 Monday - August 29th - Russell's first time breast feeding. He did a really great job and latched on quickly. He seems to do really well breast feeding which is awesome. The nurses and Occupational Therapists say it's often easier than bottle feeding because the baby can regulate the amount of food he receives a lot easier. This is ideal for little Russell since he has issues with swallowing so he can eat and have enough time to slow down and swallow without coughing and choking. Eating on his own is required so he can go home. The Occupational Therapist was very pleased with how well he did today. 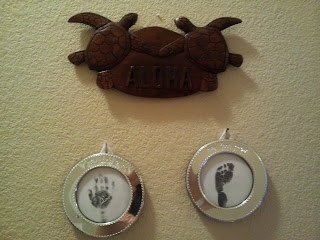 Friday - September 2nd - Russell was transferred out of his space in the NICU 2 to the Special Care Nursery. This is where babies go before they're sent home. The nurses and doctors have finally started to say he could come home soon which is great considering before they'd never give any sort of time frame. They also told us we have the option to room in with Russell at the hospital so we can learn to administer his medications and practice feeding him all on our own but with the nurses and doctors nearby in case we need any help. 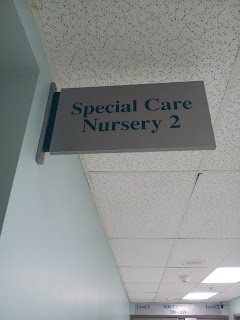 Saturday - September 3rd - Russell had his feeding tube removed. The doctors gave the ok to let Russell take all his feedings orally. He'll either breast feed or bottle feed with the nurses for all his feedings. They're also going to let him eat more at his own pace so if he wakes up hungry they'll feed him instead of sticking to a feeding schedule. This will be more like how he'll be once he comes home so hopefully it will help him adjust. Joe got to bottle feed Russell for two of his feedings today. Russell did a really good job. 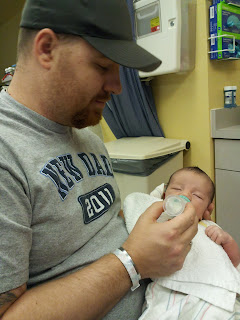 So that's what's been going on for little Russell. We visit him every day in the morning and at night. We're very lucky the hospital is so close to the house or we'd be spending a lot more time driving and a lot more money on gas for sure. I've been doing well recovering from the c-section and blood pressure issues. I still am in pain and some days are definitely easier than others. My blood pressure does seem to still be out of whack even on the medication so we'll have to see if that improves.

We're still praying for Russell every day and can't wait for him to come home soon. It's hard to believe but it's almost been a month since little Russell came into our lives. He's such a sweet baby and we love him oh so much.
Baby Mac