July 10, 2011
It's been a rainy weekend but the other day when I went out to water the zucchini plants I did see my little bug friend. 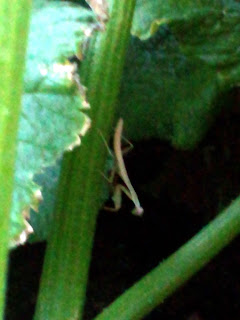 Then again it could have been another praying mantis. HE HE HE. Either way it was interesting to see another bug in the same plant.

Joe and I also went to our childbirth class this weekend. It was just the basic class that is offered at the hospital where we'll be having the baby. It was pretty informative overall. I liked that we got to tour the maternity ward, meet some of the nurses that work there and learn more about what happens at the hospital when you're there to give birth. Most of the material they covered I already knew but it was still a good class and very affordable. Plus we got a bag full of samples, magazines and coupons. 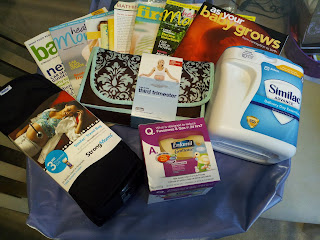 This weekend I also got to attend the wedding reception of my cousin Dale. Well actually I think she's my Mom's cousin but if you know folks from Hawaii everyone's an aunty or uncle. No one really differentiates if someone's a second cousin or if it's really your Mom's aunt. It's good times. It was a fun reception and I got to see some of my relatives I haven't seen in a long time. My uncle Craig was there and my aunty Alice was there with my uncle Eric. I also got to see other folks that I know I've seen at different family functions in the past so it was cool to see them again. Also we did get to see my aunty Grace, uncle Sherwood and uncle Richard. They come to Vegas more often but it's always nice to see them again. They had a good assortment of food and some yummy desserts. We even got these cute bags filled with Hawaiian treats. 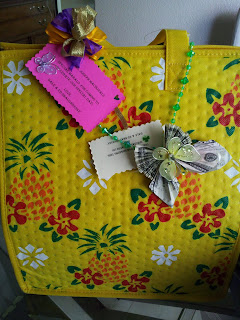 I have another bag like this one that Joe and I got on our honeymoon. I usually used my bag to take lunch to work but this bag is even bigger which is great. Also you can see the butterfly made of money. Those were actually leis that everyone got when they arrived. They are made with $7 which is symbolic because they were married on 07/07/11 in Hawaii. It was also cool because they found out that Dale's grandparents were also marred on 07/07 and it would have been their 70th anniversary this year. Very cool!

Overall definitely a busier than usual weekend but it was good. I hope everyone else has had a good weekend. If you did anything interesting feel free to share. :)
Baby Mac Our Garden wedding