How Does Your Garden Grow?

July 05, 2011
Ok so I will confess I am NOT the best gardener. At this point I'm more trying different things and seeing what works and what doesn't. My Mom is an amazing gardener and grows all sorts of yummy fruits and veggies. Me on the other hand, I'm lucky to harvest a few veggies each year. But... My Mom and Joe just say it all takes practice so that's what I'm doing practicing...

Today I went out to water the plants. This is one thing that seems to be thriving somehow: 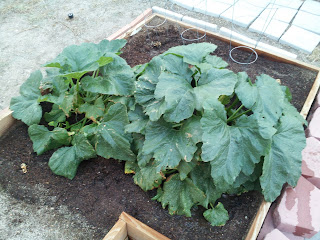 Giant zucchini plants! They even survived the whole time we were out of town for Kim and Andy's wedding. (If you click on the link for the wedding you can see pictures of my Mom's awesome yard/garden. It's beautiful! Joe took some fun pictures.) We just watered them a ton before we left and came back and I swear they were doing better in our absence. HA HA HA! I even got to harvest some zucchini tonight... 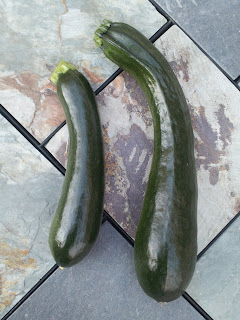 Yeah the one on the right was NOT that big yesterday. I swear it doubled in size over night. HA HA HA. Hopefully they'll taste good if nothing else.

Also I found an unexpected visitor while I was watering the zucchini. 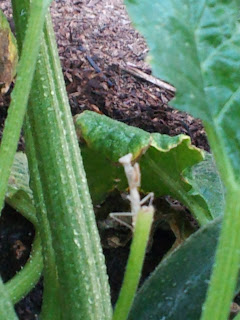 Yep it was a tiny praying mantis. I hurried to grab my cell phone which was outside with me to snap this photo. It's a little hard to see him but he was seriously just bigger than a thumbnail. It was so tiny I probably would have missed him and watered him away if I weren't squatting down to water the zucchini at the time. I normally don't like bugs but I know these ones eat other bugs so I'm ok with that. Plus they're a little less creepy than spiders though I'm definitely not about to make friends any time soon. HA HA HA!

Anyway, I just wanted to share that little surprise from the garden. I hope everyone has enjoyed their 4th of July weekend. You can catch the pictures I tried to take of the fireworks HERE. Nope they're not perfect pictures but I tried my best with my cell phone. HA HA HA! Either way we had a good time with Joe's Mom. We did a beer can chicken on the BBQ and Joe's Mom brought potato salad. YUM! We also had corn on the cob and grilled up some fresh pineapple. Tasty stuff. More adventures to come because we're getting closer to Baby Mac's arrival.
Our Garden