Return of the Mac

April 08, 2011
WOO HOO!  I just wanted to post a quick update that we were able to see our tiny baby Mac today.  He/she is weighing in at 1 pound 2 oz right now and according to the Dr's is right on track with all his/her measurements.  We saw the perinatologist and a fetal cardiologist (don't know if that's what he's really called but he basically did an echo on the kid just by looking at stuff on the monitor. Ah technology!) today and they said everything looks great.  If you're interested in checking out the most recent ultrasound pictures you can check them out HERE. 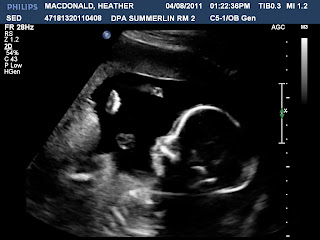 Hello baby Mac!  We love you!


Oh and speaking of babies does anyone have an opinion on spending money on a crib?  We have seen a lot of great cribs at Babies-r-Us that can convert to toddler beds as the child grows up but we've also had it suggested to just use a Pack n' Play type thing instead as an alternative to spending the big bucks on a crib.  My thought is the Pack n' Play doesn't look near as comfy as a full crib does and I worry that it wouldn't be as supportive as an actual mattress.  If you have any thoughts/opinions on the subject please share!  :)