April 30, 2011
So today for whatever reason I was up early and getting things done. Laundry is started, did a quick bit of vacuuming, cleaned the kitchen table off, put the mail out, took out the garbage and even made a strawberry banana smoothie. YUM! I'm looking forward to more crafty creative time this weekend too. My awesome friend Kalah is coming over and we're going to do some scrapbooking type stuff. YAY! Lately I've been making some cards which has been really fun. Check them out:

I'm also working on a cross stitch thing for Baby Mac. I hope that if I keep working on it I'll get it done before the baby gets here. I think it will be really cute when it's done though. 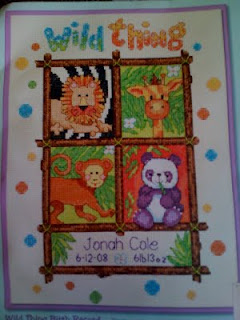 I'll have to snap some pics of my progress as it gets further along. So far I only have the parts of the border on the left, right and above the panda done. HA HA HA! I definitely need to keep on working to get this done. Lucky for me it's something I can do even if I need to take it easy. I pop some pillows up on the couch, turn on some music or TV for background noise and chill with the cats while I work away.

Also on a stranger note I went out to water the garden this morning and noticed some of my carrots that were growing have gone missing. Not like just uprooted by a neighborhood cat or eaten by a bird, like totally and completely gone... I mean it's been super windy the last few days but there is no way they could have just blow away for crying out loud. I'm serious there's not even a hole where they would have been. I'm like UHHH... Creepy... Apparently it's the attack of the carrot snatchers... Oh and it's not like they were even ready to be picked yet. They were tiny so taking them really wouldn't have done anyone any good. It was just kind of creepy. It was too chilly to stay out though so I'll be back out to water the rest of the garden later this afternoon and I'll survey if anything else has gone missing.

Oh and for those of you waiting on pics of my baby bump I'll get some up soon. We cleaned house and now can't find the camera cord so I'll have to have Joe take a pic or two on my phone so I can send it to myself. I love that we have a million camera cords and of course NONE of them are compatible with one another even though the cameras are the same brand and same model just newer. REALLY... OY! I guess they've got to get you somehow since you're not buying film. HA HA HA!

If you're crafty like me check back later. I made a few other cards but they are going to be given away so I don't want to post them until later. :) I'm sure I'll still have some other great things to share. I hope everyone has a good weekend. I haven seen pics of snow up in UT. My poor UT homies up there freezing. What's up with that. Then again it's cold for Vegas, windy and in the high 60's but still nothing compared to snow and below 30. BRR...
Baby Mac Creative Goodness My Happy Place