Santa is Coming to Town!

December 03, 2010
I wanted to share some more pictures of some of the great things we got for our adopt-a-family.  We're still waiting on some more clothes for the boy so hopefully they'll be here soon. 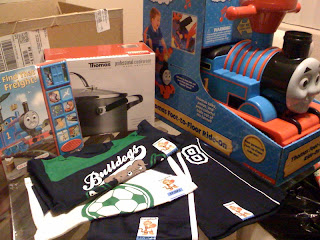 The Thomas the Train thing is cute.  The kid can ride on it and it has a bunch of buttons that make all sorts of train noises and it says some stuff I'm guessing Thomas sais on the cartoon.  Either way it's cute.  Oh and it pops balls out of it's smoke stack too.  It seemed like a good compromise since the kid wanted a tricycle and likes Thomas the Train.  HA HA HA!!!  I hope he likes it. 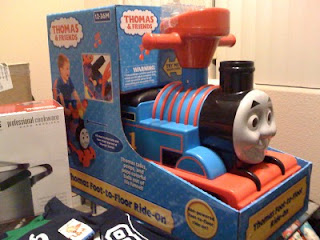 Also we got the pot by using some of our Albertson's stickers.  They have this thing going on now for every $10 you spend you get stickers and when you fill up a card you can get cookware for one penny.  I have a TON of cookware so I thought it would be a nice addition for the mom because you can really cook so much in a pot like that.

We also got a book that's got sound which should be fun for the boy.  I'm big into giving childrens books to kids because I feel kids are far too obsessed with video games and technology.  It's like what ever happened to reading a book and using your imagination to bring it to life?  There's a reason people can't think on their own anymore but that is neither here nor there...  Anyway, we also got some clothes because I figured that can't hurt.  Walmart has some crazy low priced clothes you can get that are all coordinated to match and since we don't know much about the boy personally we figured that would be a safe bet since he'd have some outfits that would coordinate.

I've got wrapping to do tonight and hopefully the rest of the stuff will arrive.  We've got to take it to HELP of Southern Nevada by the 10th and we're excited to drop everything off.  YAY!
Adopt-a-Family