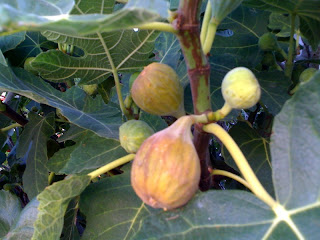 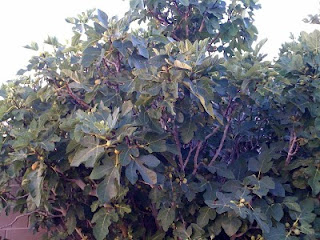 So I wanted to share some pictures from the fig tree in our backyard.  It's HUGE and it looks like the figs are finally starting to ripen.  I'm excited to try some fresh figs and see how they are.  The only thing I think I've tried with figs are Fig Newtons and I never liked those...  Hopefully the fresh figs will be as awesome as I think they will be.  :)

And a Meme….(for those of you that don’t know, a “meme” is basically a survey that many people do and/or are tagged to do…). Kim tagged me in this one.


1. When was the last time you played air guitar? Come on, I’m not asking you to admit you still listen to Def Leppard.
I must say I agree with Kim that I will admit to listening to Def Leppard but I don't know if I've ever played air guitar...
2. What’s the oldest thing in your fridge?
HMM...  Now that's a scary thought.  I think there are some leftovers from a while back...  It's probably a good idea to clean out the fridge soon...  YIKES!
3. Vampires, zombies or please make it stop?
I must say that I really could care less about either.  I don't watch many movies so I don't care if either continues on...
4. If you had to change your current profession, and could be anything, what would you do?
I would have my own business doing something with food and nutrition.
5. Undergarment of choice?
OOO getting a little personal are we...  UMM...  I don't know I own a ton of stuff from VS but I don't think I have a favorite...
6. What is the tackiest thing you own?
Well I don't think anything I have is tacky.  Maybe not in style or kind of lame but probably not tacky.  Then again I have some winter clothes that are boxed up so who knows what that includes...
7. Summer with no air conditioning or winter with no heat?
Definitely winter with no heat.  I can always put on more clothes and curl up under a blanket.  Plus where I'm at in Vegas winter wouldn't be that bad.  HA HA HA!
8. Desert island time: Wow, there is a band that will play whenever you snap your fingers and OMG, it’s your favorite! Who is it?
HMM...  Depends on the day and the mood I'm in but I say it's a tie between Simple Plan or A New Found Glory.
Here are the people I’m tagging to do this meme:
Tiffany
Jenn
Kaycee
Mecqae
I'm excited to see how the figs turn out.  :)
Our Garden