Nothing ventured, nothing gained...

April 12, 2010
So this weekend was out of this world!  I took on a challenge that at times I questions, I feared and thought I would never have the courage to do.  I am serious when I say this was probably the scariest thing I've ever done in my life...

I learned to ride a motorcycle. 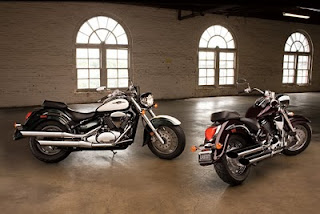 Suzuki Boulevards - My friend Christina rides one and loves it
I know it doesn't sound like much and to a lot of people it probably isn't.  I know that there are WAY scarier things I could be doing like being a police officer or serving in the military but for me, for my life and for how I live this was scary.  To me it was terrifying for a number of reasons.


1. I was doing this alone.  I'm all good to participate in a sport in a group or to go somewhere new with friends but doing something alone is inherently a little scary for most people.  I mean I didn't know anyone in the class, I had no clue if they would be nice or all experienced people or what to expect.
2. I don't drive stick.  I mean I've driven a manual transmission car once or twice in my life but I was never good at it and typically had issues getting from stop to 1st gear.  The fear of not being able to do it was scary.  Also the fear that I could embarrass myself by dropping the bike, not being able to go from stop to 1st gear or just looking stupid and not being able to do the exercises were all there in my mind.
3. Riding a motorcycle has some inherent risk.  You sign a waver at the beginning of class and yeah it's not like a car where you have 3,000 pounds of steel and airbags around your body.  If you eat it on a bike your chances of surviving unscathed are seriously not favorable...  Plus as I grow up I have a lower and lower tolerance for danger.  I definitely do do anything "extreme" and would probably never jump out of a perfectly good plane unless it was my only hope of survival...  This to me was crazy.
Seriously for me it was the most scary thing I've ever done.  Both Saturday and Sunday when we were actually learning to ride more than once I just wanted to bail and say peace out it was fun but I'm over it.  I would wake up about 3 seconds away from a full blow panic attack.  I couldn't breathe I was freaking out.  I mean it was outrageous...

But knowing my $100 wasn't refundable I kept telling myself it will be ok and you might as well try.  Worst case senario is you try and fail and then you just don't ride a motorcycle.  Big deal.  Not like I own a bike and I can always ride behind Joe.

In the end it was scary but fun.  I learned a lot, overcame the fear and accomplished something I had on my goal poster all last year.  This year it wasn't on there but I guess after staring at it for over a year it stuck somewhere in my brain that I was going to do this.  I am so grateful to the wonderful instructors we had and the very nice people in the class.  I was amazed how we all seemed to raly around each other to boost each other up and keep going.  It was awesome!

So, now the question is do I buy a bike.  I think I will, someday.  For now I will practice (thanks to an awesome father-in-law who is letting me borrow an old bike) and just learn the skills I will need to be a defensive rider.  I want to be very comortable before I attempt going any sort of distance or on the freeway.  I think that will be a while.  :)

For anyone interested in the Las Vegas area the class at CSN is amazing and quite the steal.  It's $100, they provide the bikes and it's only over the weekend.  I had a few hours of class on Friday after work, most of the day Saturday and part of the day on Sunday.  It's quick and you learn a lot.  Plus the instructors really work to help you improve so you can pass the test.  One guy, Ray, in the class said the Harley Davidson place charges $350 for their course.  OUCH.  Plus with CSN when you pass you get a certificate that lets you not have to take the written and riding test at the DMV.  You just show them the certificate and you get your M class.  AWESOME!


Oh and if you take the class this is what I recommend...  Friday's not too bad because it's only a few hours but if you go straight from work bring a drink and/or snack so you don't get hungry/tired.  Saturday is totally draining and a lot of others in the class felt like I did...  You WILL be tired.  Saturday night I'd plan on dinner and lounging at home so you can get a full nights sleep.  Sunday you do get out earlier than Saturday but I still wouldn't plan anything crazy.  Maybe dinner out or better yet a massage.  Muscles you didn't know existed will hurt and a massage or even just some time in a hot tub or sauna would be lovely.  Oh and both days don't eat too heavy of a lunch.  On Saturday after lunch you have class time the rest of the day and it's easy to get tired if you over eat.  On Sunday after lunch you test on the bikes so there's no reason to be sluggish from eating the biggest burrito known to man...  At the Cheyenne campus there was space to eat inside the building or Joe and I shared lunch in his truck the one day because the weather was nice.  These are just some tips from my point of view.
So I just want to say to anyone who's afriad to do something to get out there and do it.  Try something small, build your confidence and keep on going.  I know in the grand scheme of things this is not a life or death skill that I have to know but I do feel good in the fact I was able to overcome the fear and make it happen.  Plus the fact I accomplished something all by myself was great.  I'm ready to keep moving forward to tackle the next big thing.
100 Day Challenge Accomplishments Life