Our Backyard. It's ALIVE!!!

February 05, 2010
So I obviously haven't updated in a while but I have meant to.  I actually have some fun stuff to share.  YAY!!! 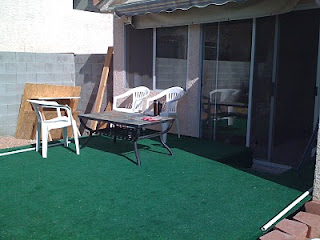 This is the porch Joe built in our backyard.  It's cute and cozy and perfect to enjoy especially when the weather's not too hot.  There is a retractable shade thing too that we can put out when it's sunny. 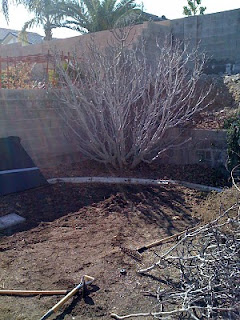 This is the giant fig tree thing we have in the backyard.  There were still leaves and figs under the tree but we raked those up and trimmed the tree back.  Not that we knew what we were doing but hey we got some stuff done... 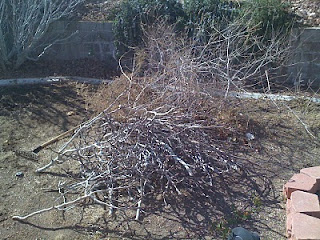 This was the aftermath of our pruning.  We didn't just take care of the fig tree.  Joe climbed up the little wall back there and trimmed some of the other tree that was back there.  It was a lot of work but so far things are looking good. 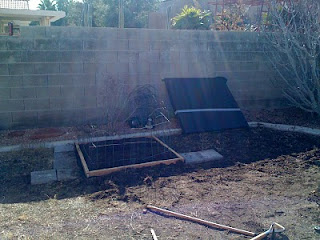 Yay!  I'm so very happy we're starting a garden.  We cleared out some of the dead old grass that was there and then put down one of the beds we made.  You can see the other leaning up against the wall.  It's going right next to the other one. 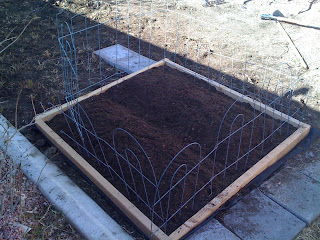 This is a close up of the bed we put down.  The fencing isn't permanent but we were hoping it would deter the cats that roam our neighborhood from turning it into a giant litter box.  EWW!!!  We've got some great veggies to try, some herbs and even some onions.
I hope the garden works out.  My Mom is the BOMB gardener but I tend to kill even the simplest of plants.  I'm hoping that I can learn how to grow my own veggies.  I'd love to one day live in a home where I have a lot of space to garden so I can grow a lot of my own veggies.  That would be amazing!  Anyway, we're excited to get planting some stuff and because it's Vegas we are not likely to have any freezing temps so things should work out.  I guess that's one bonus of living here.  HA HA HA!!!
Backyard My Garden